The National Adoption Service for Wales has today (14 July) issued a call to find permanent families for the group of looked after children in Wales who wait the longest to be adopted.

As the service publishes its second annual report, showing significant improvement in adoption services across Wales’ innovative three-tier adoption service, the needs of a small group of children who typically wait the longest has been declared as a key focus.

Suzanne Griffiths, director of operations for the National Adoption Service (NAS), said: “For the first time I can remember, we have more adopters waiting to be matched than children available with appropriate adoption plans.

“In an ideal world there would be no children waiting when we have adopters available, but sometimes the circumstances of the children and available adopters do not match.

“Most often that is due to adopters not being able or willing to take on the specific needs of the children currently on the national adoption register.

“Children who are part of a large sibling group of three or more that we are trying to place together are most likely to wait much longer to find suitable adopters.

“Other children for whom it is often harder to find suitable adopters have faced neglect or abuse during their early life or before birth that leads professionals to think they may have significant health and social care needs, including physical and developmental difficulties.

“That is why we are launching the Wales-wide search for more potential adopters willing to take on these specific children. See The Whole Child (#SeeTheWholeChild) is an honest and open campaign to encourage people considering adoption to come to the process with an open mind.

“We need people with space in their lives for a child, love to give and patience – basically the qualities of any good parent. If they can see beyond the issues, beyond the challenges and see the whole child, they can give children who are waiting to be adopted – and themselves – a new start and a chance at a stable family life.”

Adoptive families from across Wales have given voice to the campaign by telling their adoption stories. Adopters, Helen and Gareth have two children with developmental delay and dyslexia.

Helen says: “Our son’s delay is a challenge without a doubt, but it part of what makes him who he is. I wouldn't change him for the world.

“The way I look at it is that I would have loved him and done all I could to help him with these problems if I had given birth to him, and it no different for me just because he’s adopted. Perhaps the shock of having a child with special needs is taken away when you adopt because you have professionals helping you understand what challenges you might face before you agree to the placement.

“It’s important to be honest with yourself and with the adoption service during the matching process about what you would and would not be willing to take on.”

Adoptive mum of three, Eileen knew she wanted a large family but was unable to have birth children herself. “When we decided to look in to adoption, there was a huge sense of relief. The process of being approved and matched with Martin initially took around 18 months, but that was nearly 18 years ago and the process is much quicker now. His sister Jenny came very soon after and Ellie-Rose arrived four years later when their biological mother was once again pregnant.

“There plenty of noise and nappies with three children, that’s for sure and the adjustment when they all arrive at or around the same time can be daunting. It’s not all been plain sailing but on the whole we all rub along.

“Most importantly, I have kept them together and, while sibling bonds can be strained at times in any family, they will always have each other. That is a special thing.”

NAS governance board chair, Cllr Mel Nott OBE, welcomed the campaign, commenting: “The National Adoption Service has achieved a great deal in its first 19 months. The five regional collaboratives are up and running; the approval process for potential adopters is being been streamlined; matching children with adoptive families has been improved; and we have absorbed the Wales Adoption Register into the service.

“There are several factors at play reducing the number of children leaving care through adoption. Not least of those are recent family and appeal court decisions that have led to fewer children being considered for adoption.

“That aside, the work undertaken by NAS to recruit, approve and prepare potential adopters has seen unprecedented numbers coming forward to give some of Wales’ most vulnerable children a safe, permanent family home.

“The National Assembly for Wales children, young people and education committee published its follow-up inquiry into adoption services in Wales in March 2016, showing that progress is good but there is more that needs to be done to make adoption services in Wales the very best possible, particularly in respect of post adoption support. Developing this support is also a priority for the National Adoption Service.

“This #SeeTheWholeChild campaign is another way we plan to better meet the needs of children for whom adoption is the best option for a secure, safe and happy life.”

The work of the National Adoption Service and its Governance Board is supported and advised by an Independent Advisory group. Phil Hodgson MBE, Chair of the Advisory Group commented: “Much has been done to deliver the Ministerial expectations set out in the Social Services and Well-being (Wales) Act 2014 and that is to be welcomed.

“The public and voluntary sectors have collaborated to make that happen, and we have listened to the views of adopters and adopted children to ensure the service evolves to meet their needs.”

Adoption in Wales in Numbers 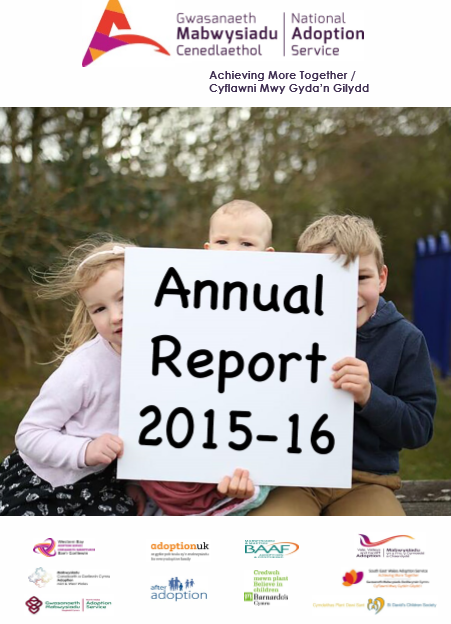 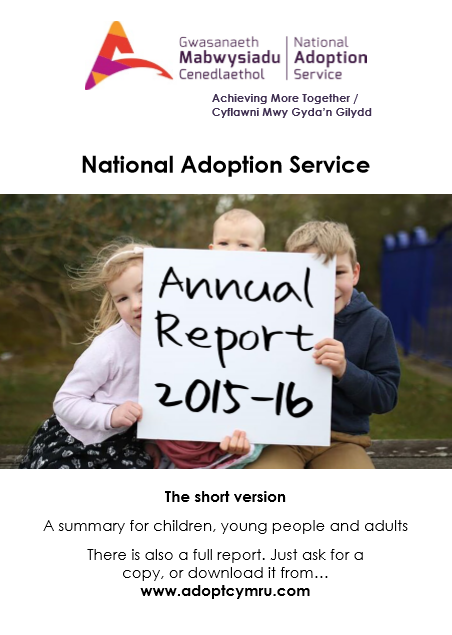