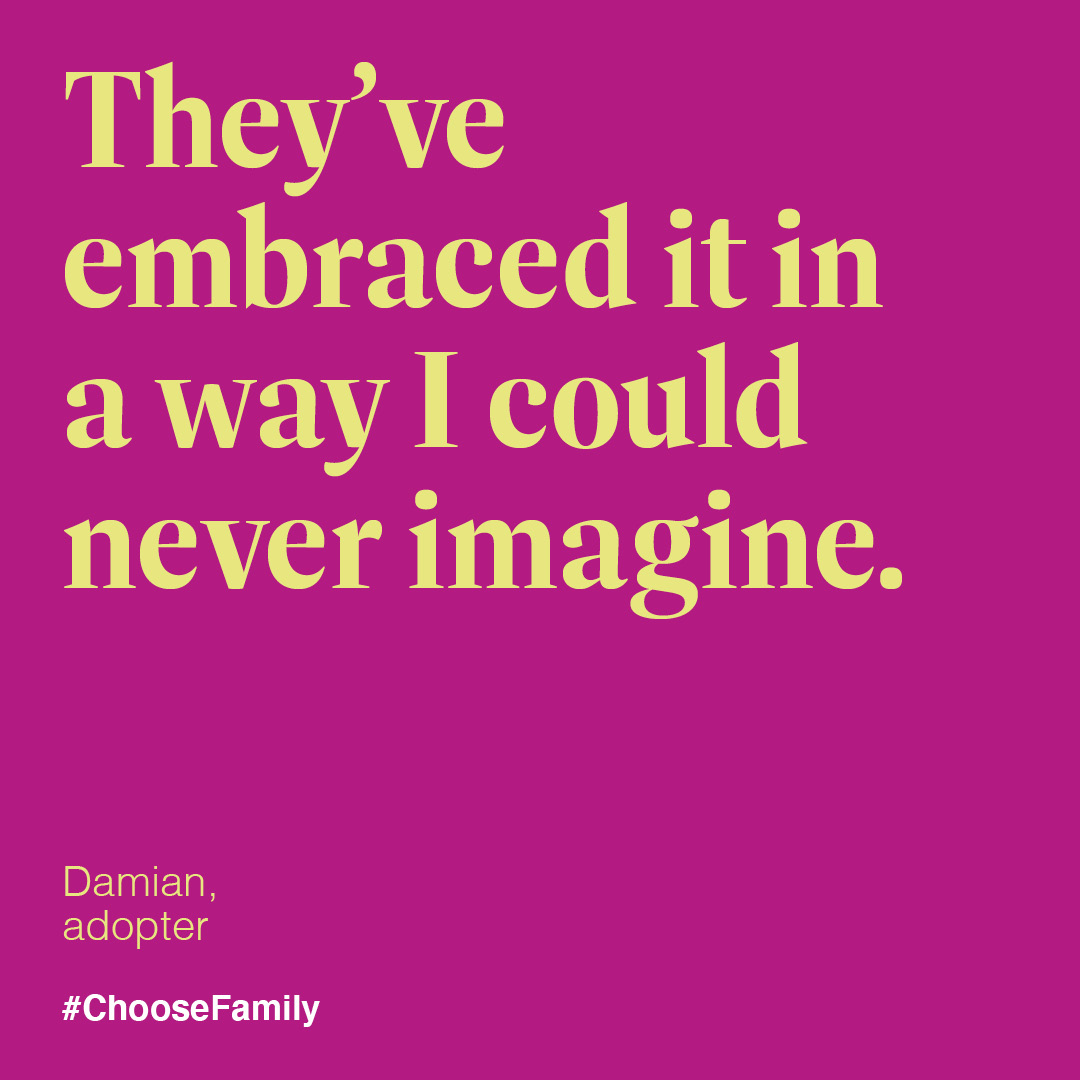 Damian, 31, adopted through St David’s Children's Society when he was 27 years old. For Damian and his partner, adoption had always been their first choice when thinking about starting a family.

The couple decided not to carry out research into the adoption process, believing that many of the concerns people had about adoption were outdated.

At first, Damian and his partner intended to adopt one child. But after realising how many sibling groups were waiting to find a new home, they decided to adopt three-year-old twin boys.

This is Damian’s story…

“My partner and I adopted in 2018. For us, adoption was the only choice. We didn’t consider any other avenue, we just wanted to provide children with a loving home. A lot of people we spoke to who had adopted during a previous generation had limited positive experiences. However, adoption is very different now. You are much more involved in the narrative and the process.

“The process was thorough and almost therapeutic. We both asked questions, and they did, too. It really helped the process and meant we didn’t need to do any research online as all our questions were answered. The adoption process requires a lot of thought – but you’ve got to go through it. We embraced it all.

“When my partner and I decided to adopt, we only wanted to adopt one child. But as we progressed through the assessment, our social worker told us there were lots of sibling groups in the system waiting to be placed. At the time, children aged over three were left to wait much longer so our age preference was for children over three.

“The perception people have is that if you adopt a younger child, they may not have witnessed any trauma, or won’t have fond memories of their childhood. But this isn’t true – and I think further information should be provided to potential adopters on this.

“The first time we met the children was just incredible. At first, it felt like we were babysitting someone else’s children and it all felt surreal. It didn’t really sink in that we were about to become parents. When the children walked through our door for the first time, they ran in screaming and laughing and ran straight upstairs. We decorated the house and bought them lots of toys, too.

“The first time they met their grandparents was surreal for both me and my partner. Our parents are still young enough to have the energy to run around and play with three-year-olds – and I’ll never forget that moment. It was so special. When we told our parents we were adopting, some of their friends had a few reservations but I think that’s just a generational thing, with a lack of research and awareness.

“When our kids finally met our parents, it felt so normal. The kids were put in a position that they never asked to be in and they were able to come out the other side of it in a positive manner. The kids really embraced meeting their new family, their forever family. That isn’t to say there aren’t problems, but we are working with them, not just us, but our whole family.

“The boys struggle to sometimes identify their emotions. Earlier this year, we got back in touch with the adoption agency and asked for support from our social worker. As a family, we felt like it was a problem that needed to be solved. We sat down and explained to the kids that we weren’t able to fix this problem, so we would seek the help of someone that could.

“The kids have embraced it in a way I could never imagine. They’ve been so open to learning and getting help. Many adoptive parents may not know that this support is available. If we need any help, we ask and work with the kids to get through it.

“Adoption has made us more open and more dynamic. We have really come to appreciate the difficulty the children went through before they came to us. We are a unit. We move forward together - and we have a lovely little family.”