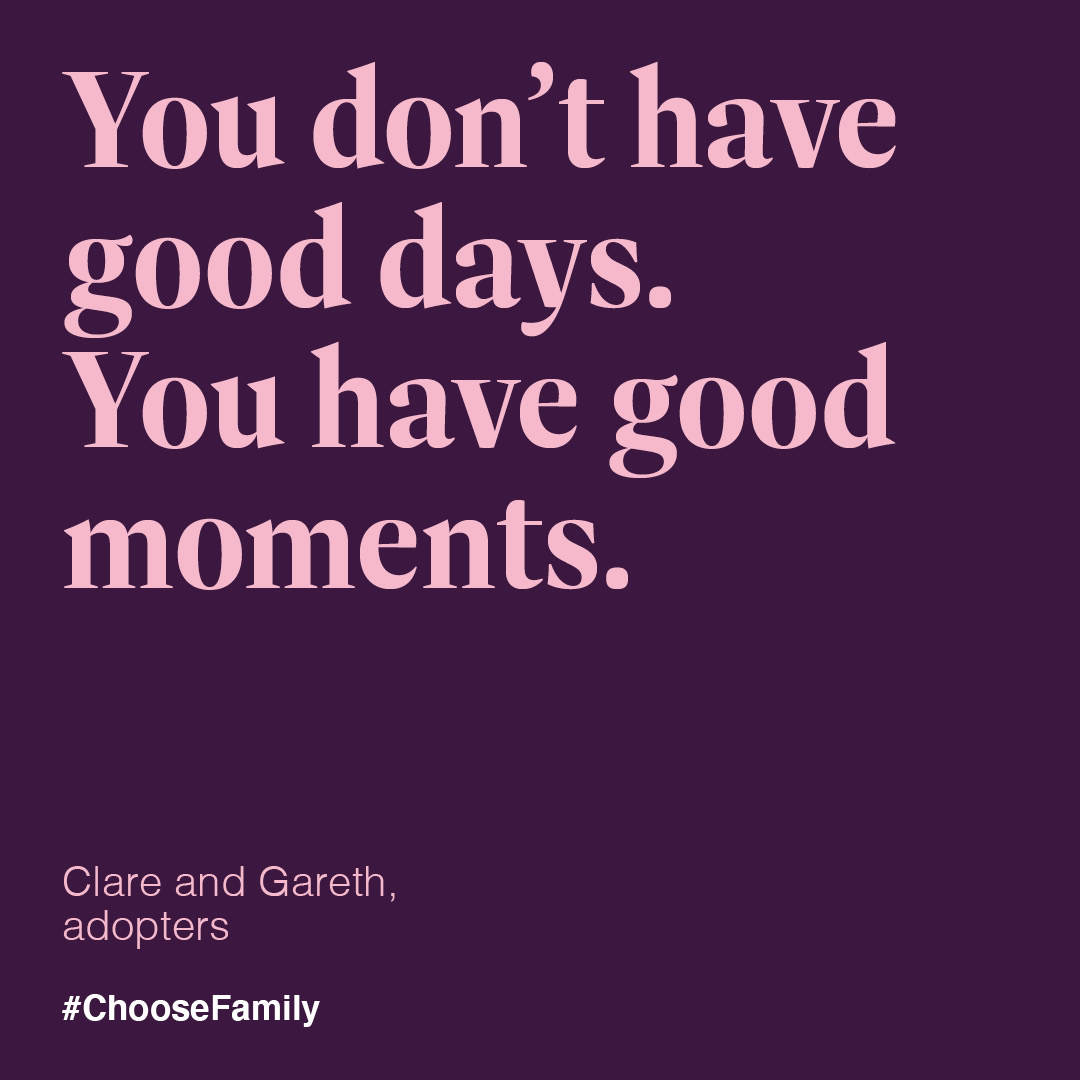 Clare and Gareth adopted through Vale, Valley and Cardiff Adoption in 2016. They adopted a sibling group of a boy and two girls who were 4, 3 and 1 years old when they came to their new home in south Wales. The couple wanted a big family and when they realized wouldn’t be able to have their family naturally, they decided to adopt a sibling group of three – though Gareth would have easily taken seven or eight – to fulfil that dream.

“We wanted to adopt a sibling group, we wanted a big family and thought for them it would also be safety in numbers, which would in turn help them to settle in and attach to us more quickly.  It’s really important to maintain any stable, positive early relationships for children who have had a tough start in life and sibling groups are naturally harder to place than single children so it just made perfect sense for us all round.  Good for us and good for them.

“We weren’t concerned about the age of the children – people tend to think the younger the child the less impacted they will have been, but this is not always the case, as every adopted child will come with some level of trauma, whether that be exposure to drugs and/or alcohol during the birth mother’s pregnancy, broken relationships, neglect or abuse. Sadly, this is the story of modern adoption.

“Our youngest daughter, who came to us at just 13 months old, is a very bright and engaging child, but she can be violent which is making school life difficult. Understandably this has caused friction on occasion with other parents. She now has full time one to one teaching support although her long-term future within mainstream schooling is still uncertain.”

“They say on average a child laughs 100 times a day but at the start our children – especially our eldest two – very rarely laughed. We’d play silly games, watch funny programmes, but got very little feedback. When our middle daughter was about 6 she became aware that beef was “really cows” and Happy Meal nuggets were “really chickens” – the latter penny dropped on the way round our local Macdonalds drive-through.

“This moment also coincided with her discovering her sense of humour. After a few moments silence she asked, “why did the chicken cross the road? To get to McDonalds!”, she shrieked triumphantly.”

“We all burst out laughing at her clever use of irony, but she immediately started crying and shouting, ‘stop laughing at me’.

“The chronological age or intellectual ability of an adopted child doesn’t always correlate with their emotional age so she was unable to understand that laughing at what she had said, despite her knowing what she had said was funny and agreeing that she said it because it would make us laugh was not the same as laughing AT her.  Very complex!”

“Like any parent, you are all gooey eyed at the beginning, but there will be moments that catch you off guard, reality slapping you hard in the face.

“When our son went on his first school trip to a local castle, he was really excited on the lead up to it but on the actually day he getting increasingly quiet and more withdrawn. As we were leaving for school, he suddenly turned to me stony faced and said, “Mummy, you’re really going to miss me” I replied that yes of course I would, I missed him every day when he went to school, but he’d be back at lunchtime and I’d see him then for a big hug. His face brightened instantly, and he said, “Oh I thought I was going to live in the castle.” The relief on his little beaming face was utterly heart breaking.”

“Adoptive parents are often referred to children during the adoption process as your forever family. It simply didn’t occur to me that he had no idea what ‘forever’ actually meant. At 4 years old at the time and carrying all that worry around on his own, not even realizing he could share it.”

“Our social worker told us to pick our battles. It’s a great piece of advice and something you realise very quickly as a parent.  Due to their early life experiences and level of need we have a lot of very firm boundaries in place to keep everyone safe – our family basically wouldn’t function without them, but wherever we can we try to relax and go with the flow, which is probably nearer to our natural personality types.

“For example, our son wore his swimming goggles every single day, everywhere he went from the day he moved in until the rubber straps perished and they fell apart and our middle daughter would wear all her favorite clothes at the same time – layered up like the world’s least convincing shoplifter.

“We want them to be their own people, develop their own unique personalities and encourage them to communicate with us in the best way for them – within reason of course!”

“Because of their past experiences our children can find showing and accepting affection difficult. They have often learnt they can use hugs to get what they want – sometimes it can feel more like a bargaining tool than a sign of fondness.

“Well used phrases such as, I hate you, bounce like water off a duck’s back.

“Then the other day, completely out of the blue our middle daughter gave us a card she had made to say thank you for giving her such a lovely life. It brings a lump to my throat just thinking about it. Far more impactful!

“As much as we say that we’re so lucky that we got to pick our children (and we tell them this all the time, so much so that our littlest asked me the other day if I’d help her pick children to adopt when she was a grown up), our children have actually claimed us too.

“The foster carer had done such a brilliant job of getting them used to us before we met them by showing them pictures, videos, even using our perfume on teddies and pyjamas, that they called us mummy and daddy as soon as they saw us. They wanted a mum and dad as much as we wanted children, and this has extended to our whole family.  We all love nothing better that a great big family get together.”

“We often get frustrated that we can’t fix a lot of their problems, and their lives are unnecessarily more difficult in many ways. We often feel like we have bitten off more than we can chew, but like most parents you don’t know what you are going to get, you just deal with it.

“You don’t tend to have good days; you have good moments, but they’re absolutely golden and we wouldn’t change it for the world. We absolutely love the bones of them, unconditionally.

“Our son, who is still struggling with attachment issues, unsurprisingly given his dire experiences in the birth family home, paid me the ultimate compliment the other day by telling me wished that he’d come out of my tummy.  It’s moments like that that Gareth and I look at each other and high five, remembering, that’s why we’re doing this. That’s what keeps us going. That and a bloody good support network!”